One of the difficult parts when prototyping  a new project is to find reliable power sources that don’t cost you too much. Here I’ll show how to refurbish dead battery packs by stripping them down, testing each cell and combining cells to produce a new pack.

I’ve been pretty luck with some of my recent finds, an old electric cycle lithium pack, they seemed only to have a faulty connector to almost dead Apple MacBook Pro batteries, so I decided to tear them down to see if there was something profitable.

Here is a look at them 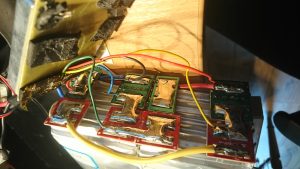 So next step is pull the packs apart and get each individual cell out, i know this is a pain, particularly when they may already be made int eh size you want, but time spent here will save a lot headaches and pain later.

so above we have a cell on charge, this is from the bicycle pack, didn’t find any information on google about this one but by calculation should be 4.25 amp, so a pretty good size. note start of slow, so i set the charger to 500 mA and checked regularly  while it was on my desk to make sure it was not getting warm, if it does start to get warm its a good sign that cell is dead, chuck it. equally if after charging and left unused for a few days you check the cell and find its dropped voltage say over 0.2 Volts, its a cell thats probably going to go bad, chuck it.

Go through all the cells you have, charge them and make notes of their voltages and when you come to make up your battery pack, check the cells have not lost voltage, only use the best ones you find, this is the same for the famous 18650 cells that are used in laptop batteries.

I would also recommend however tempting they seem dont get fooled into buying lithium cells from china or anyone that claims supper high capacity cells and really cheap prices, you will only get disappointed when you find out in fact they only hold a few hundred mA at best.

so why do i want these cells, what am I planing with them, I will show you all soon but for now a quick gimps (ignor the lead acid batteries on it, there just for testing as i had them to hand), enjoy – keep safe 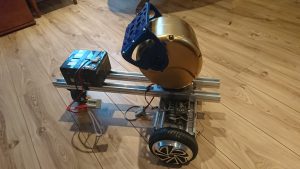 Li-poly cells are slightly different from there predecessors in the fact that they provide a average of 3.7 Volts compared to the 1.2 Volts of NiCd and NiMH cells. Additionally they also provide a greater power to weight ratio, it’s now normal to see from a Li-Poly a few hundred mA from a cell that only weighs a few grams.

Li-Poly cells require slightly more attention to both the charging circuit and also a monitoring circuit whilst being used. Thus they have to be protected from overcharge by limiting the applied voltage to no more than 4.235 V per cell. During discharge on load, the load has to be removed as soon as the voltage drops to around 3.0 V per cell, if the cell is continued to be used below the 3 volts then you will find that the cell will no longer accept a charge resulting in a cell that is of no use to anyone and can only be chucked into the bin (recycled).

Among the advantages of Li-poly cells one of it unique features is that there is no metal disks in the cells unlike others this enable the cell to be virtually any shape desired. This means that for the mobile phone and laptop market these cell are ideal. Due to this usage of the cell in such markets as the telecommunication, it has meant the mass production of cells and hence the price of the cells is constantly dropping.

Kokam possesses its own unique, proprietary technology (the Superior Lithium Polymer Battery or SLPB), which has proven marketability over existing and perceived competition. Substantial opportunities exist to tap into the market of cellular phone manufacturers and distributors who seek better lithium-ion batteries than those readily available on the market. The challenge is to bring cost-efficiency to the major channel members and OEMs, and Kokam has met this challenge. As more and more of the world’s population have gained an interest in these products (as well as notebook computers and similar portable devices), the demand for lithium-ion batteries has also increased and will continue to increase over the next five years. Kokam’s particular patented design employing the next generation lithium-ion/polymer technology, will increasingly occupy more and more of the total rechargeable battery sales in this industry. Based on its advanced technology and price competitiveness, Kokam’s market share will be extended as fast as it is able to increase production capacity. The cellular phone industry represents very strong demand for this next generation technology, which far exceeds the overall industry’s production capacity. Additionally, the size of market for notebook pc and PDA is being increased fast will be a great opportunity for Kokam. Kokam makes high standard and reliable re-chargeable Lithium battery and its processing equipments and also develop new advanced technologies for future.

SANYO has developed a lithium polymer battery that is ultra-thin (under 4mm) & ultra-light with superior performance, SANYO reliability, and new technology developed in our labs. Lithium polymer batteries employ a new gel-type electrolyte to provide power to the most demanding application in the hand-held world. Once again, SANYO has developed the answer to the demand for ultra-thin, ultra-light, high-power applications.