So I had sourced the relatively cheap motor / wheel assemblies from eBay, originally  used for those hover boards. The next issue was controlling them, I could easily make my own controller but I would want it to look good so would want a professional PCB made, which is all fine, i’m a design engineer I can do all that, but the cost soon adds up. So off to eBay again, sorry, and I run across some controller boards that cost around £7 have a voltage of 12 to 36 Volts and are said to handle 500 Watts if you put a heatsink on them. So I order a couple, a few weeks pass and they arrive from China, in the typical way with very lacking documentation, well none in fact just a jiffy bag and the boards. So I look over some other suppliers of the same board and find the pin outs. So I have some pins I need to pull high / low to choose direction and enable the motor then I have a variable voltage input (0-5 Volts) for the speed. RC network to the rescue coupled with the PWM output on an Arduino, bingo variable voltage output from a Micro controller. There is also a pulse counter output, I have not played with this, but should be useful to give an indication as to how much the motor has moved.

Anyways, I hookup one of the motors on the bench, start off with a pot to change the speed of the motor, all works great, nice and easy. so I start to mount all these bit up on some old copper clad board I had laying around, all the motor controls sit nicely in between the motors, Will clean up the wiring later. Next I start writing the Arduino code, start off simple and get one side working, first with a taranis remote control and then with serial data from a PC, no problem, then I pretty much copy the code I have written to control the extra motor controller. fire her up and one side works great the other side is anything but controlled, seemingly doing whatever it wants, strange, so double check wiring. All seems to be fine, start double checking code, all seems to be in order too. so I pull the motor controller board off and stick on a spare motor I have, it works as i expect, really strange, so I stick back in the robot, try again, its does not want to play, so with a bit of head scratching I think to myself its late will pick it up again tomorrow.

So next day I double check everything again, all in order, I even write some really simple code to make the other side work. But still no play.  So I admit defeat I pull the controller out again and try it on the bench, oh I see now, wont work on the bench with the spare motor either now, so a little more messing and it seems it just likes to do random things, sometimes works sometimes doesn’t, maybe its got different firmware of maybe its just got hit by static, in any case I order two more of the controllers, which have arrived now, but I’ve not had time to fit on in.  So I will post again about my adventures with these controllers, but at the moment its a 50/50 chance of the them working, I will give credit to one that does work though, its a great cheap large brushless motor controller when hooked up to the Arduino. 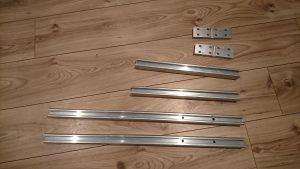 If you want something spinning hard and fast, brushless is where it’s at. Brushless motors offer much better power-to-weight ratios compared to brushed DC motors, but some applications – like a large robot’s drivetrain – are less straightforward than others. One of the biggest issues is control. Inexpensive brushless motors are promising, but as professor churlz puts it, “hobby motor control equipment is not well suited for the task. Usually created for model air planes, the controllers are lightly built, rated to an inch of the components’ lives using unrealistic methods, and usually do not feature reversing or the ability to maintain torque at low speeds and near-stall conditions, which is where DC motors shine.” Taking into account the inertia of a 243 lb robot is a factor as well – the controller and motor want to start moving immediately, but the heavy robot on the other side of it doesn’t. The answer was a mixture of hardware and firmware tweaking with a lot of testing.

The build log is full of interesting things including gearing and other mechanical details of the robot, but to get the gist of the brushless motor drive train journey there is the section on what led professor churlz to think about whether brushless motors – varyingly successful in little bots – would scale up to a ~250lb robot, details about his testing and investigation of the motors and controllers he chose, and finally a summary of his conclusions. In the end he found it a qualified success.

Conventional DC motors employ a mechanical commutator, but new technologies has meant that it is now possible to have an electronic commutator. In both cases, the commutator converts DC into a rotating magnetic field, in order to support continuous rotation. However, the electronic solution affords all the advantages of solid-state construction and operation, plus enables the inherent advantages of brushless motors over their inferior counterparts, without the use of an amplifier. In stark contrast with typical brush DC motor drives, contactors and relays are also eliminated, due to the on-board power supply and built-in directional control.

With the advent of this technological milestone, new levels of performance, efficiency and power density are being made available, with reduced operational and maintenance costs. Applications such as hydraulic power units, integrated starter/alternators, low voltage and small hybrid vehicles, and numerous others, which were previously too complex and expensive, and therefore limited to high end niche markets such as aerospace and military platforms, are now commercially viable.