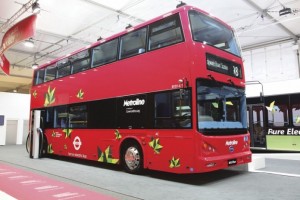 The move by Transport for London (TfL) has been pegged by many as rather a bold move. The first BYD Double-Decker bus was deployed on its route with a special ceremony at London city hall with London’s Deputy Mayor of Environment and Energy, Matthew Pencharz formally receiving the first bus from BYD Europe.

Pencharz during the event that the running costs of these buses as well as some of the maintenance and operations cost are much lower than currently used buses. With zero-emission and zero-tailpipe-pollution, there is a huge environmental benefit specifically for London where pollution levels are relatively high compared to some similarly sized and populated cities around the world.

As the plan goes, currently TfL is commissioning five of the all-electric double decker buses on Route 98 operated on behalf of TfL by Metroline. Route 98 was chosen given its status as a pollution hotspot in the city.

BDY Europe will be providing support to TfL and Metroline for installation of fast charging equipment at Metroline’s Willesden Bus Garage in north London. Additionally, BYD will provide driver training for the bus operators.

BYD, the world’s largest electric vehicle manufacturer, designed and developed the vehicles to Transport of London’s specifications. The five buses scheduled for deployment are more than 33 feet long and feature air conditioning, seats for 54 passengers with space for 27 standing passengers (81 total).

The buses are equipped with BYD-designed and built Iron-Phosphate batteries, delivering 345 kWh of power that come with a Industry-benchmark 12 year battery warranty, the longest electric battery warranty available. The batteries can power the bus for over 24 hours and up to 190 miles of typical urban driving on the service routes with a single daily recharging requiring only four hours. TfL plans to charge the buses overnight using low-cost, off-peak electricity to provide additional cost savings.